Early in  2016 I had the pleasure of filming an episode of Beachfront Bargain Hunt by HGTV as the buyer’s agent for Richard and Kim Clarke here in Jaco Beach, Costa Rica.

Richard and Kim were visiting Costa Rica for the first time with no real intent to purchase property although they had a desire to own a beach property outside of the United States. They came to me with their wish list looking for a house or condo with 2 bedrooms, 2 bathrooms, ocean view, close to town and ability to rent while they aren’t occupying the property. Kim also wanted to be close to a work out facility and they had a budget of $300,000.

In the Beachfront Bargain Hunt show, we toured 4 properties starting with an oceanfront condo complex called The Palms. 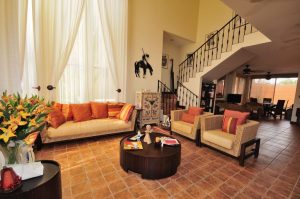 Within the last week I had obtained an amazing deal on a 7th floor condo with stunning ocean views featuring 2 bedrooms, 2 bathrooms among 1,485 square feet and fully furnished at a list price of $269,000. Adjacent to The Palms is a hotel and casino called Croc’s that features 3 restaurants, a coffee shop, a night club, a Las Vegas style casino, convenience store, day spa, salon and a gym that Kim could use. I thought that this property ticked off all the categories that they were looking for including great rental potential.

From The Palms we went to an oceanfront community of townhomes called La Flor. Here we toured a 3 bedroom, 2.5 bath house with a garage that comes fully furnished at a price of $249,000. The house is 2 floors and the largest property we viewed at 2,100 square feet. Richard really liked the extra square footage and bedroom but Kim didn’t like that she couldn’t see the ocean even though the house was just a few steps to the sand. 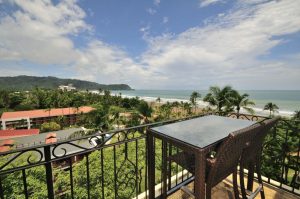 From La Flor we headed to Acqua Condominiums that is an upscale 8 story tower located closer to town where we viewed a 7th floor 2-bedroom, 2-bathroom unit with huge views of the Pacific Ocean and tropical backdrop of Jaco Beach. The condo and the building itself is first class with the finest of materials and craftsmanship. The list price was at the top of their budget at $299,000 but it had everything they were looking for including an onsite gym and picturesque infinity pool.

For the final property I wanted to show them something different and a little out of the box so I brought them 20 minutes south to an ocean view lot in a development called Costa Esterillos. The lot listed at $94,000, is 3,500 square meters in size (a little shy of an acre) and has panoramic views of the ocean and has water and power connected to the property to where Richard and Kim could build a custom home in about 6 moths. They were excited about the possibility of designing their dream house that could be done within their total budget but they were concerned about being away from town and Kim wasn’t thrilled about waiting 6 months.

The Clarke’s did end of purchasing but I don’t want to spoil the show so you’ll have to tune it to see what they selected.  See Beachfront Bargain Hunt on HGTV.

Contact Shawn Fletcher for more information on these Beachfront bargains or for any of your Costa Rica real estate needs.